Of Alpha Wolves and Pack Theories

How did the term alpha wolf originate and which dog training myths can you forget about?

Imagine aliens chose to explore the social life of us humans. For their observations, they choose a prison, study the inmates’ interactions and then publish their research results as facts of how our human society works. Sounds absurd? The concepts of dog training based on the so-called pack theory were developed just like that. They were based on assumptions about how wolves as the ancestors of our dogs live together. Elementary flaw: The observations that led to the development of the terms Alpha Wolf and Pack Leader were made on captive wolves forced to live in a very small enclosure and are not comparable to the social structures of wild wolves.

Wild wolves live in families
Wild wolves do not know this kind of pecking order, because they live in a family group, consisting of the parents and their offspring who leave the family when they reach sexual maturity. Young wolves behave very much like us humans. We also stay with our parents as long as the benefits outweigh the disadvantages, and we leave the parents to look for our own living space and partner. The authority of the wolf parents is not based on their “alpha status,” but on greater life experience over their offspring who try to copy the parents’ behaviors. Modern behavioral researchers therefore now avoid the terms pack leader and alpha wolf, since they arouse false ideas of a strict order and military hierarchy. They prefer the terms family and breeding male / female.

Dog training myths you can forget about

Myth #1: Your dog has to accept you as the pack leader
The fact is that wolves only build a hierarchy within their own species. In a wolf family, the parents have the privilege to reproduce. Since we are neither dogs nor wolves, nor do we reproduce with them, the idea that we could be a pack leader for our dogs does not stand up to scrutiny. However, dogs and wolves are highly social and intelligent animals that can also engage in close relationships with other species. For example, there is evidence of families of wolves and ravens living together closely for generations. Therefore, you are a social partner for your dog, but not a pack leader.

Myth #2: Alpha roll and neck shake are ways to discipline your dog
The fact is that the alpha roll, where supposedly the superior turns the underdog on his back to demonstrate his power, does not exist among wolves. It is likely that submission gestures of juveniles who voluntarily lay down on their backs in front of their parents were misinterpreted as alpha rolls.
The so-called “neck shake” can be observed among wolf pups playfully practicing various individual sequences of hunting behavior. However, it does not occur in interactions between adult wolves and puppies.
Using the alpha roll or a neck shake on your dog is a massive physical assault and a breach of trust, but he will not be able to comprehend your intention.

Myth #3: The Alpha always eats first – Therefore you always have to be able to take food away from your dog
The fact is that all wolf family members eat at the same time when a large prey animal has been killed. Even young wolves and puppies defend their share against adult family members or try to devour parts of the prey as a whole.
When your dog defends his resources, he shows normal behavior. Teach him that swapping with you is worthwhile and simply leave him alone when he is eating.

Myth #4: When your dog puts his head on top of you or initiates physical contact, it means he’s dominant
The fact is that in the wolf family, physical contact and mutual grooming among members serves to strengthen relationships.
Regular social interaction, such as cuddling, grooming or lying together, promotes the relationship between you and your dog. If your dog puts his head on you, he probably just feels comfortable in your presence. Or maybe he needs a pillow …

Myth #5: You have to initiate and end play with your dog to ensure your alpha status
The fact is that wolf parents enjoy to participate in family play when a relaxed atmosphere prevails and sustenance is secured.
It does not matter who initiates play and who stops. Even who wins the tug-o-war is completely independent of age, rank or gender. If a pup plays too roughly, the play partner breaks off by leaving. Do the same, just stand up and leave the room when your dog plays too roughly.

Myth #6: Old and sick wolves get killed by the pack
The fact is that wolf families provide for injured and old members for long periods. Often older wolves retreat to the edge of the territory as their strength wears off, leaving the field to the younger ones.
Since your dog can not retreat in his old age and also does not live in a dog family, but in a group of dogs that were raffled together by us humans, you bear a special responsibility for your senior dog. If aggression towards a senior occurs, it happens not because another member of the group strives for the alpha position, but because your senior’s senses fade and he can no longer see or hear fine warning signals. Here you are required to manage your group of dogs.

Myth #7: Puppies enjoy Puppy license that protects them from aggression
The fact is that there is no default puppy license protecting your puppy when interacting with another adult dog that is not his mother. Wolf parents are very tolerant and caring towards their OWN offspring. In the first eight weeks of their life, the puppies enjoy freedom to explore and try out all kinds of behavior. Starting with the ninth week, parents start to use clear interrupters if the behavior is too unrestrained. In field research, there is not a single documented case in which parents would have allowed a foreign wolf to approach a puppy. Therefore, we simply don’t know whether puppy license also exists when a wolf pup meets a wolf who doesn’t belong to the family. (If so, the eight week period would already have ended, anyway, by the time you take your puppy home.)
When you let your puppy get in touch with other dogs, keep a close eye on the adult dog’s body language and arrange play dates with well socialized adult dogs for him.

Myth #8: Your dog always has to walk behind you
The fact is that, depending on ability and life situation, different wolves including juveniles lead the group. Especially within their own territory, parents allow the youngsters to take the lead.
So it does not matter if your dog is in front of or behind you on your walks.

Myth #9: Only the pack leader initiates the hunt – If your dog fully respects you as the Alpha, he will not go hunting anymore
The fact is that wolves do not have a designated leader who initiates the hunt. Apart from the fact that wolves in Europe, unlike wolves in North America, prefer to hunt alone, it’s not necessarily the adults who initiate the hunt. Young wolves often chase prey animals without a clear plan because they still lack the experience to know which prey is worth chasing. The predatory drift is intrinsically rewarding for your dog because endorphins are released. This has nothing to do with your leadership skills. When a young wolf returns from a solo trip, the parents pay him little attention.
Also, under no circumstances should you punish your dog when he comes back from an unauthorized hunting trip. Just put him on the lead and work on your recall.

Myth #10: Wolves are driven by instincts, they lack emotions – to speak of love in dogs would therefore be humanizing
The fact is that although wolves are predators who kill for survival, they are also highly social creatures with a rich family life who fool around with their offspring and mourn the loss of a family member. The behavioral scientist Günther Bloch in one of his books describes the emotional life of wolves: “The network of relationships between the family members is fundamentally determined by tolerance, acceptance, harmony and a close love relationship. (…) Wolves play with fellows and objects, are extremely curious, maintain intensive emotional relationships, enjoy regular sunbathing, get the zoomies, jump from heights into a river, splash around in the water like exuberant children and express their joie de vivre in various ways. Where is the difference to our domestic dogs?” (Source Bloch, Günther: Der Wolf im Hundepelz. Pubished by Kosmos Verlag, Stuttgart, 2004, p. 185ff.)

Do you need to be dominant?

If you train your dog according to the dominance theory, you disregard his elementary needs. Training methods based on rank reduction often seem to work, but not because the concept of alpha status and dominance was true, but because dogs learn impulse control and their guardians set them boundaries. Luckily, in modern dog training, we have other tools at our disposal for achieving the same effect through cooperation, reward based training and meeting our dog’s needs. 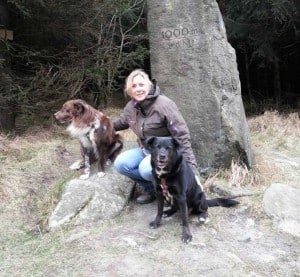 Simone Müller is the owner of Training4Paws dog school near Heidelberg, Germany. She is a trained NABU Wolf Ambassador and Certified Dog Trainer (ATN).
Holding a degree in English, she offers not only individual canine coaching but also specialized translation services and seminar hosting for English speaking trainers.
Simone is a member of the Pet Professional Guild (PPG), the Pet Dog Trainers of Europe (PDTE) and Wildlife Detection Dogs e.V., a non-profit association to foster the use of dogs in wildlife conservation.
Find out more on https://www.training4paws.de/our-services-in-english or follow Training4Paws on Facebook https://www.facebook.com/training4paws.de